Little did I know Dustin would be so into trains when I bought him an engineer hat back in May to protect his half bald head from the sun.  Heck, I didn't even know it was an engineer hat at the time . . . I just like stripes.

Over half a year later and his passion for trains quadrupled!  Especially after his cousin gave him her entire wooden train set.  We have the best family!
After looking through many train themed parties, this is what we came up with. 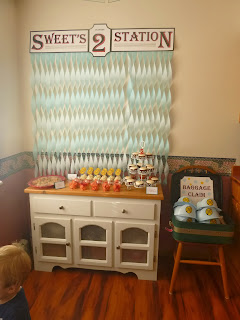 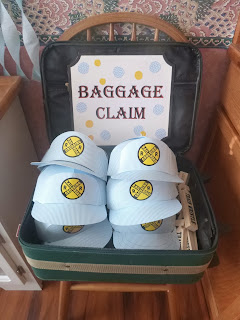 I originally wanted the color scheme to involve every color in the rainbow, but then I began to panic with so many options, so I narrowed it down to the basic primary colors (red, blue, and yellow). 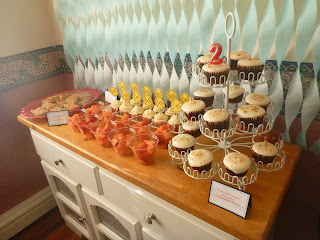 At our sweet station we had train rice krispie treats, fruit cups, hidden veggie banana cupcakes, and chocolate oatmeal cupcakes.  All very tasty!  I attempted to do a marshmallow frosting on the chocolate cupcakes, but they didn't hold up very well. 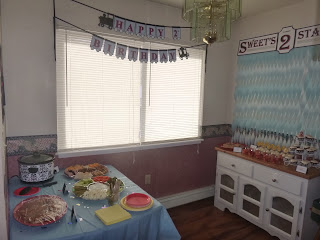 My sister made our awesome banner!  Just last fall we decided to start making each other's kid's birthday banners.  Despite being a long plane ride away from each other, we managed to find a way to still help each other during our kids birthdays. 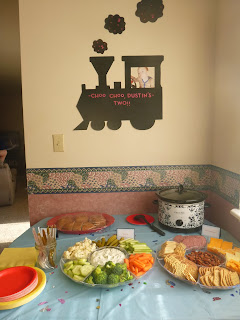 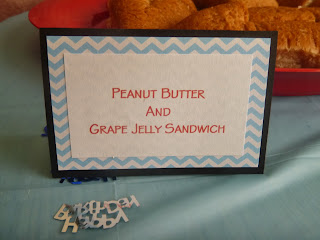 My sister sent me the left over paper from the banner she made, so I used it for my food labels.
My favorite decoration was probably the train picture with Dustin as the conductor. 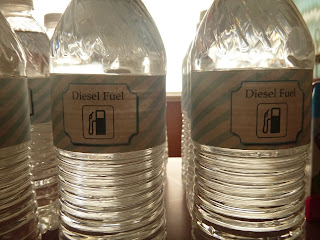 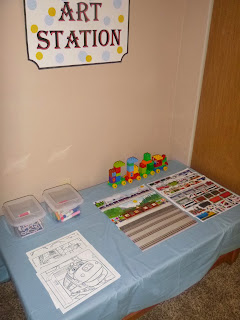 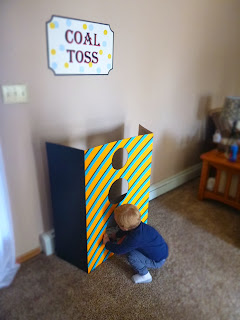 Our activities included an art station with color wonder markers, reusable stickers, and regular stickers.  Then I made a coal toss using black bean bags and cardboard.  In the living room we had out his train set and in his bedroom we set up more toys to play with. 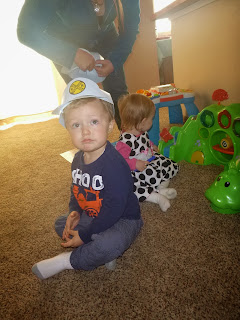 The paper hats were a hit (with me).  Dustin and the other kids didn't seem to love them too much.  At least we got a few pictures with them on :)

Overall, it was a fun birthday and am already planning on birthday number three . . . just kidding . . . but I'm not.
Posted by Shelly Porter at 6:54 AM

Email ThisBlogThis!Share to TwitterShare to FacebookShare to Pinterest
Labels: What are the Porter's up to?